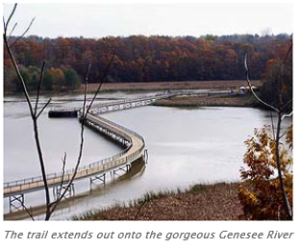 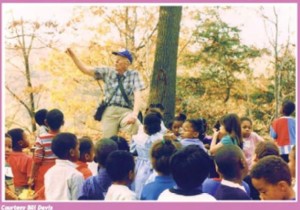 “As a historian focused on local history, Bill pioneered research on the early settlements that formed Rochester’s history – Charlotte, McCrackenville, King’s Landing, Frankfort and Castletown. His mentors were other historians and long-time residents’ oral histories. His unique ability to listen, as well as to speak, has preserved local lore and history for generations to come.

Stating in 1982, his lifelong interest in neighborhood history would focus on the restoration of the Charlotte Genesee Lighthouse, whose light had been abandoned for almost 100 years” quote from the Bill Davis Overlook panel.

Next time you are in the area, be sure and see this addition to the Charlotte streetscape- a scenic overlook located at the site of the old Stutson Street Bridge that pays tribute to the man who has done so much for our lighthouse and for the Rochester community. Available 365 days per year, it serves as outdoor museum that shows the history and development of the Port of Rochester and old Village of Charlotte.

DIRECTIONS to the overlook: The Bill Davis Overlook is located at the east end of Stutson Street, off Lake Avenue.

What we know as “Lake Avenue” today was once called “Broadway” from the triangle north to the lake and the “Charlotte Boulevard” south of St. John’s Park. When the area was part of the Village of Charlotte, the numbers along Broadway started at the lake and ran south. Annexation of the Village of Charlotte to the City of Rochester necessitated changing the name to Lake Avenue, since there was already a street known as “Broadway” in the city. The street was then re-numbered to run south to north.

Listed below are some of the historic buildings of the Village of Charlotte listing their past and present uses.

4115 Lake Ave – Charlotte High School. Built in 1933 as a Junior/Senior High School in the art deco style, with a maritime theme to reflect Charlotte’s village heritage.

4353 Lake Ave – Captain George Ruggles’ homestead. built in the mid-19th century. He was President of the Village of Charlotte, inventor of the rotary snowplow for locomotives, a ship owner and captain and a world-renowned builder of racing canoes.

4359-4363 Lake Ave – The “Denise block” was once the site of the village Post Office, a bank, the Odd Fellows Hall and a dry goods store. (now 1st floor businesses)

4409 Lake Ave – Lake United Methodist Church. The first wooden church structure was built in 1853 and was moved to the rear of the lot when the brick church was dedicated on February 25, 1912.

4421 Lake Ave – Ferguson Hardware. The oldest business in continuous existence in Charlotte until it ceased operation in 2005. It began in 1874 with storefronts on both Latta Road and River Street, until moving to this building on Lake Avenue in the 1920’s.

4435 Lake Ave – The Latta-Meech house. Oldest house in Charlotte, built in 1806 by Sam Latta, who was the first Customs Collector at the Port of the Genesee. (now Cannonball Cafe)

4449 Lake Ave – “Jordan block” Built at the turn of the 20th century, it once housed McGuire’s village grocery store, a barbershop, the phone company and a theater. (now the Charlotte branch Post Office)

4352 Lake Ave – St. George’s Episcopal Church. Site of the village roller skating rink before the church structure was built in 1891. The land was purchased in 1886 for $263.50 from the village blacksmith, Henry Pollard. (now Christian Community Church)

4650-4780 Lake Ave – The blast furnace. An iron ore manufacturing facility that started business in 1869 and employed many Charlotte residents

Additional Points of interest in Charlotte not located on Lake Avenue:

Colonel Patrick O’Rorke Memorial Bridge – this bridge replaced the aging 1917 Stutson Street bridge. The new span is a 4-lane bascule lift-bridge that crosses the Genesee River, connecting Charlotte to the Town of Irondequoit. Construction started in the year 2000 and the bridge was dedicated on October 1, 2004.

188 Beach Avenue – Built in 1931 as the Bath House for Ontario Beach Park with a 2nd floor ballroom. The building has been renamed the Roger Robach Community Center.

332 Beach Avenue – This was the residence of Dr. Edward Mott Moore, founder of the Monroe County Park System and President of the Rochester Historical Society. He also started the Convalescent Home for Children (now Shore Winds Nursing Home) which is located just west of his summer residence.

10 Latta Road – this building once served as the customs house for the Port of the Genesee, the Port of Charlotte and the Port of Rochester until 1917. It once housed Ferguson Hardware, the village of Charlotte post office and a ship’s chandlery. (formerly the Tapecon Building, now called the Custom House)

River Street’s Charlotte Cemetery – historic cemetery dating from the early 19th century that consists of two sections; the one on River Street is the newer of the two, with the older section further east and north toward the river. A cemetery association was incorporated in 1888.

Buried here are the daredevil Sam Patch, families of the earliest settlers, ship captains, leaders of the village and veterans from the Revolutionary War, the War of 1812 and Civil War.